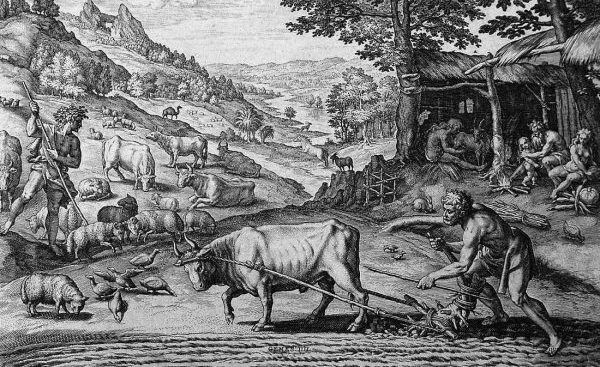 When Pharaoh calls you, and says, ‘What is your occupation?’  you shall say, ‘Your servants have been keepers of livestock from our youth even until now, both we and our ancestors’—in order that you may settle in the land of Goshen, because all shepherds are abhorrent to the Egyptians. -Genesis 46:33-34

In the Bible, almost always God seems to be in favor of shepherds (or nomads) over farmers (or settlers). This seemingly unfair favoritism is noticeably clear beginning with the story of Cain, who was a farmer, and Abel, a shepherd; God described the builders of human civilization as the descendants of Cain. Now, here in Genesis 46 we read that Joseph insisted to his father that he would tell Pharaoh they were shepherds, who were abhorrent to the Egyptians, who were farmers. Of course, this was because Joseph knew that by saying so, his family would be able to settle in Goshen, which was a good land for both shepherding and farming. Later we read that King David was a shepherd, and Jesus addressed himself as “the good shepherd.” In fact, the English term “pastor,” which specifies an ordained clergy who is serving a congregation, is from the Latin word pastor meaning shepherd.

Swedenborg explains the reason for God’s favoritism of shepherds over farmers in the Bible as the symbolic description of our mentality and thus spirituality. Abel was the first shepherd in the Bible to symbolize one who trusts the Lord and thus humbly appreciates what one has gained in this world as the blessings and gifts from God. Meanwhile, Cain as the first farmer symbolizes one who trusts one’s own ability and thus arrogantly claims ownership of what one has gained in the world. In the eyes of the farmers, the shepherds could appear to be ineffective, low achievers with no pride. However, in the eyes of God, farmers appear to be foolish for claiming ownership of something that is not from their own power. The truth is that the shepherds are cultivating their spirits along with their physical wellbeing on earth, while the farmers are only cultivating their physical life on earth, which is devoid of spiritual cultivation. If you were to review human history as a whole, you might find some clear evidence that humans became arrogant and selfish when they started to believe that they are capable of controlling nature. Soon after, continual war broke out for the sake of magnifying and glorifying one person’s ego: the king or emperor.

My family and friends in God, who would you like to become spiritually, a farmer or a shepherd?