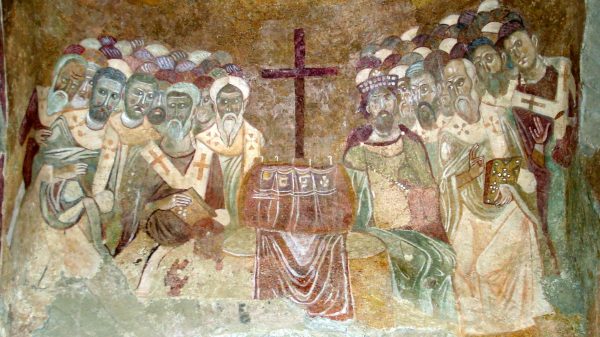 Joseph said to his father, “Not so, my father! Since this one is the firstborn, put your right hand on his head.” But his father refused, and said, “I know, my son, I know; he also shall become a people, and he also shall be great. -Genesis 48:18-19

These days, many scholars agree that the teachings of Jesus Christ in the Gospels and the official doctrines of Christianity enforced by the Christian Church are not fully aligned. There could be many reasons for this difference but one of the most obvious was caused by the Emperor Constantine. His conversion to Christianity elevated the faith from a persecuted religious movement to the government-funded, official religion of the Roman Empire. Constantine not only called the very first meeting of Christian bishops at Nicea (325 AD), but also headed the council of bishops. This unprecedented practice led to two unexpected results which sewed doubts into the integrity of Christianity. First, the emperor of the Roman Empire became the head of the council of Christian bishops and second, the divinity of the Roman emperor was accepted and sanctioned by the Christian bishops. Undoubtedly, Constantine intended to use Christianity to unify the empire – which he took by force – and to garner support of the people in the Roman empire, the majority of whom were already influenced by Christianity.

Keeping the spiritual integrity of religious principles has been and still is the hardest challenge to all humans. This challenge originates from the fact that we are all fully engaged with materialistic endeavors to secure our worldly life. Usually, these endeavors feel like the most important task to fulfill, while our religious principles – those which teach, guide and inspire us to look deeply within to uncover the true, hidden reality – come second. Often, we even try to modify our religious principles to justify and adhere to our selfish and materialistic desires. However, the essence of all religious principles is quite simple: spiritual cultivation moves forward when we become capable of renouncing our selfish and materialistic desires. According to Swedenborg, this is why God emphasizes the passing of the blessing of the birthright not to the first son, but to the second or another son. The first son symbolizes good, while the second son symbolizes truth. Essentially, good should be emphasized because good is the essence of truth. However, to those who have lost their way in their selfish and materialistic pursuits, truth is the only way they could find and cultivate their way back to what is essential: good.