The Swedenborgian Church of San Francisco is a National Historic Landmark 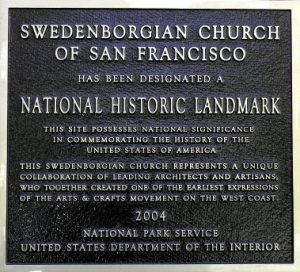 It is the first, and only, house of worship in San Francisco to be granted this honor. Additionally, the church is the first privately owned building to be designated a Landmark since the Bank of Italy in 1978, and first Landmark of any kind in San Francisco in more than 15 years. It was granted “Level Four” Landmark status (the highest available) on August 18th, 2004, by U.S. Secretary of the Interior Gale A. Norton.

The church opened its doors for worship March 17, 1895, and was designed by a distinguished group of architects including the celebrated Bernard Maybeck. Its founding pastor, Rev. Joseph Worcester, was longtime friend of famed naturalist John Muir. Rev. Worcester purchased the land on which the church and its grounds are located.

A Statement of Significance (as of designation – August 18, 2004) reads: “Described as one of California’s earliest pure Arts and Crafts buildings, this complex represents a unique collaboration of many influential architects and craftspeople. During the late 1880s, the Arts and Crafts movement in the United States sought to unite social reform, architecture, art, and the decorative arts. The hallmark of buildings in this style was their open plans and their straightforward but beautifully finished and furnished interiors. Established in 1895 and still an active church, the three buildings and connecting garden that make up this religious complex are little changed from the time of construction.”

The following is an excerpt of the National Landmarking Committee’s commentary supporting its decision to grant Landmark status: The Swedenborgian Church of San Francisco is “a critically important example of the American contribution to the Arts and Crafts Movement as exemplified in new architectural imagery, integration with the site, garden design, and use of natural materials. The interior shows the employment of the decorative arts to create a special atmosphere, and also the first examples of the ‘mission chairs.’ Among the designers were A. C. Schweinfurth, A. Page Brown, Bernard Maybeck, William Keith, Bruce Porter, and the Rev. Joseph Worcester. The Church is important as an example of the Swedenborgian contribution to American religious, social theory and intellectual life.”

If you are interested in learning more about our history, please consider booking a tour!

Your tax-deductable donations support this ministry and historic landmark.
Click the button to take you to Paypal for an easy and secure donation