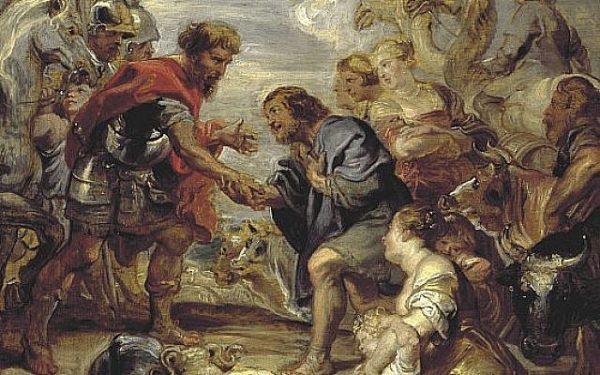 But Esau ran to meet him, and embraced him, and fell on his neck and kissed him, and they wept. -Genesis 33:4

Jacob had to run away from his home to escape the fury of his brother, Esau, from whom he stole the blessing of their father. According to the Bible, Esau was indeed furious at the moment and said to himself, “The days of mourning for my father are approaching; then I will kill my brother Jacob.” (Gen. 27:41) However, as it is clear in Genesis 33, at some point Esau forgot or overcame his anger for Jacob, and thus missed his twin brother deeply. Unaware of this, Jacob was fearful to reunite with his presumably angry brother. Somehow, Esau’s anger was only a reality in Jacob’s mind, while the real Esau had moved on from such feelings. For over 21 years, Jacob was troubled and fearful of the angry brother, who in fact did not exist. Indeed, one teaching from this story is very clear: the actual cause of psychological pain in our mind is often our own reactions to an assumed reality instead of the reality itself.

Could Jacob also have moved on and been free of such trouble? The issue is somewhat complicated, because the fact is that Jacob stole something that should have been Esau’s, and thus in Jacob’s mind Esau had the right to be angry at him. Jacob might have been conflicted by two factors: 1. he stole Esau’s blessing; 2. he would still be angry, if Esau had done the same thing to him. There are three spiritual lessons to learn from this. First, achieving peace is much easier in the mind of the victim than the offender. Second, what causes trouble is what is subjectively real in one’s mind rather than what is factually real. Third, the mental and psychological trouble is caused more often by one’s own attachment or obsession to a certain matter, thing or event then factually what happened, how it happened, or why it happened. The truth is that our mind is innately wired to remember all things in a very personal way; how I interpret the matter, the thing, or the event is more important than the reality itself.

One message that I perceive from God in the story of Jacob and Esau is that reality can be much more friendly and positive than what we imagine, but only if we are willing to go out, face it and embrace it!