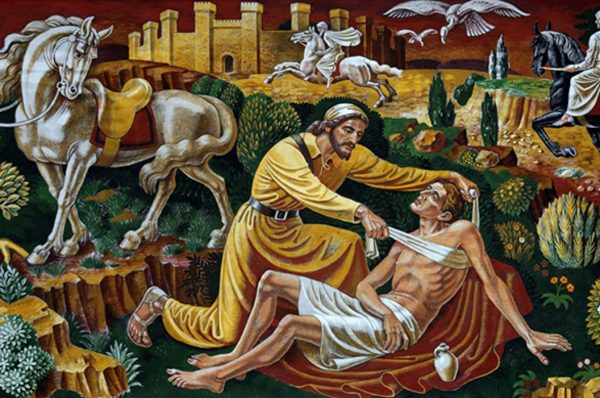 The heart of Christian belief is universally this teaching of Jesus, “Love your neighbor as yourself.” However, the history of Christianity is not exactly filled with the practice of loving the neighbor as Jesus teaches. Sadly, the fact is that there are innumerable arguments, debates, and even bloody wars and battles. What happened to the heart of Christian belief? There could certainly be several reasons and explanations. Today, I would like to point out a lesson from Luke 10 where Jesus talks about the parable of the good Samaritan. The conversation is initiated by a lawyer who wanted to test Jesus: “But wanting to justify himself, [the lawyer] asked Jesus, ‘who is my neighbor?’”

There are three points in this rather simple conversation in Luke 10 that illuminates the nature of the human mind, especially when it is centralized with arrogance and selfish love. First, the lawyer wanted to test Jesus. This probably is the core of all human problems: we have the tendency to make all things and matters fit within our little mind based on our own judgement and standards, including matters of religion and spirituality. Second, it is written that the lawyer wanted to justify himself. This points out another tendency of ours, which is to justify our own way of living and being as the right way. This could cause some serious problems whenever we encounter those who disagree with our way of living and being. Third, the lawyer asked Jesus, “Who is my neighbor?” This was a very tricky question, which includes potential traps. If Jesus were to answer that the Jews are his neighbors, then he would argue back saying “what about Romans?” But, if Jesus were to say all people are your neighbors, then he would argue saying, “God chose Abraham, Moses, and King David for a special purpose.” But knowing this, Jesus gave him the parable of the good Samaritan. After listening to the parable, the lawyer had to acknowledge that the good Samaritan was the one who showed mercy. To this Jesus told him, “Go and do likewise.”

The spiritual lesson that Jesus elevates here to all of us – yet again – is that believing God is neither about knowing doctrines nor being able to cite many verses of the Scriptures, but simply about becoming the one who can show mercy to those who are in need of mercy.