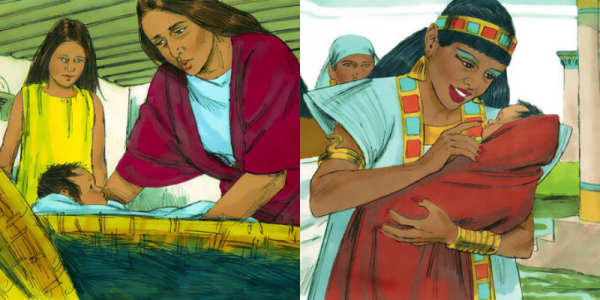 Moses was born under the Pharaoh’s decree: “Every boy that is born to the Hebrews, you shall throw into the Nile.” (Exodus 1:22) His mother secretly kept him for three months, but had a good plan to save him. She made a small reed boat with as much waterproofing as possible. Then, she put the boat on the Nile headed toward the place where the Pharaoh’s daughter came to bathe, which might have been a hidden or secret place. For extra measure, Moses’s sister followed the little boat from the bank. As planned by his mother, Moses was rescued by the daughter of the Pharaoh. Even better, the daughter allowed Moses’s mother to nurse him! Later, the daughter took Moses as her own son, giving him a name meaning “drawn.”

Moses had two mothers: the biological mother who was a Levite and the daughter of the Pharaoh, who raised and protected him. According to Swedenborg, these two mothers symbolize two different affections. The word “affection” is the translation of the Latin word affectio, meaning “to influence.” According to Swedenborg, to be affected means to be influenced deeply enough to act out. Thus, the two mothers of Moses symbolize two different influences that deeply motivate our minds to seek knowledge and truth. In a more specific way, Moses’ biological mother symbolizes the affection of good, while the daughter of the Pharaoh symbolizes the affection of the memory knowledge. In this symbolism, Moses symbolizes truth which is born out of our inner motivation to be good, but is to be nurtured and protected by our inner motivation to gain knowledge and truth. The belief of Swedenborg was that our inner desire for goodness can only be properly actualized when it is accompanied by its matching truth, and that truth takes time to grow and mature within us.

In this short story about the birth of Moses, there are two lessons for us: 1. The amazing love of a mother for her child and the meaningfulness of compassion; 2. Gaining truth takes time and is a long and challenging process. Interpreting this story in a spiritual way, little Moses might have been born in our minds, and is being nurtured. Let us take a moment to contemplate where we are in seeking knowledge and in implanting the gained knowledge.