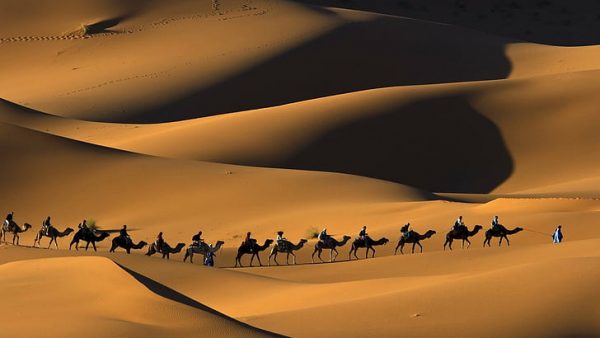 Moses fled from Pharaoh. He settled in the land of Midian, and sat down by a well. –Exodus 2:15

Moses was saved by the daughter of the Pharaoh and raised in the palace. Yet at the same time, he seems to be fully aware of his true identity as a Hebrew. Who is a Hebrew? Identifying what it means to be a Hebrew in the Bible is a very challenging task. The first place we find the word Hebrew is in Genesis 13, “Abram the Hebrew.” With this, it’s clear that the Hebrew are not native to the land of Canaan. The next place we find the word Hebrew is in Genesis 39, “See, my husband has brought among us a Hebrew to insult us!” Potiphar’s wife screamed, when she failed to seduce Joseph. In here, it is not clear what she meant by “Hebrew” except that it might mean one who is not an Egyptian. A more interesting reference of Hebrew is found in the word of Joseph in Genesis 40, “For in fact I was stolen out of the land of the Hebrews.” With this, we are a bit confused, because the land where Joseph was taken away could hardly be called as the land of his people, because his father Jacob settled in the land of Canaan not very long after his return from Haran, and had 12 sons and a daughter.

We might find a hint to understand what it means to be a Hebrew from its original word, and its meaning. The Hebrew word for “Hebrew” is ibriy, meaning “one from beyond.” The root word of ibriy is eber, meaning “the region beyond.” Also, Eber is the name of great grandson of Shem, one of three sons of Noah, and a direct ancestor of Abraham. One possible assumption is that the Hebrew were a group of nomadic people who were descendants of Eber, and one branch of this group moved to the west and settled in the land of Canaan. Thus, the natives of Canaan identified these immigrants as the people from beyond, the Hebrews. Swedenborg supports this assumption by insisting that Eber in Genesis does not mean a single individual, but a nation, meaning a large group of people. Also, Swedenborg insists that the land of Canaan was the original land where the first humans settled. In other words, people probably moved to the Eas  to find more suitable land for farming, and then a group of them returned to their homeland only to find out that it was already occupied by other people.

According to Swedenborg, our spiritual journey is somewhat similar to the story of Abraham and his descendants. We move far away from our origin, which is the spiritual aspects within us, as we grow and venture into worldly matters, and yet later we are required to return to where we started only to find that it is already occupied by all worldly matters. Reclaiming and regaining our true identity takes a long period of time with many challenging temptations. This is the spiritual meaning of the Bible in short. The journey was initiated by God in the Bible. This indicates the hope that God never gives us up and always guides us to the right direction. Thus, there is always hope at the end of the tunnel, but we must patiently and wisely endure the time and challenges we face while passing through the tunnel in order to embrace the hope.