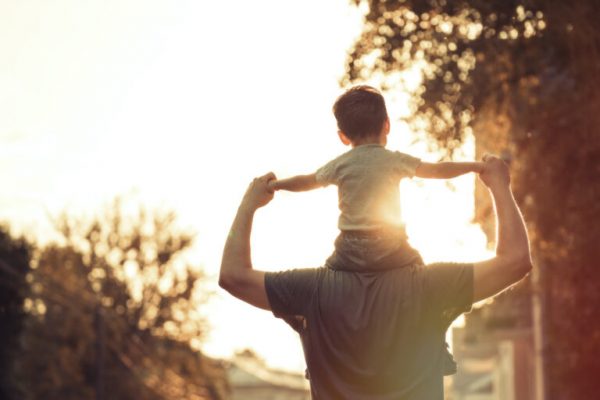 He raises the poor from the dust and lifts the needy from the ash heap; he seats them with princes,    with the princes of his people. -Psalm 113:7-8

One of my favorite songs is “You Raise Me Up” by Josh Groban with the lyrics, “I am strong, when I am on your shoulders.” The song clearly portrays that these are the shoulders of God. Yet, whenever I listen to this song, I think of the shoulders of my father. I have just one visual memory of having a good time with my father. In the old motion picture that is my memory, I am about two years old. I am playing outside on a street near our home with my sister and a few other kids. It is near sunset because I see very pretty colors in the sky. As the little me is busy playing, suddenly a big shadow covers us. But I lift my face with a smile because I know the shadow belongs to my father. His face is hidden because he has the sunset on his back. Father picks me up and puts me on his shoulders. The little me seems very happy and joyful! Even though this was nearly 50 years ago, the feeling of being strong and comfortable on my father’s shoulders is still fresh in my heart.

My parents divorced when I was about two years old. Afterwards, I met my father five or so other times. The last time I met him was in 1993 when I visited to get his signature for U.S. tourist visa documents. I was shocked and surprised to see that my father was becoming an old man who was no longer huge and powerful. We did not talk much because there was nothing much to talk about. When I was about to leave, my father took out his wallet and removed all the cash. Then, he grabbed my hand and put the cash in it, simply saying, “Here.” I looked at him, confused, without saying anything. This was probably the first time I actually looked at his eyes. After staring for a few seconds, I decided to take the cash because I felt that what he was giving me was not money, but his love. About three years later, I received another amount of money from my father, about $2,500. My aunt who brought me the money told me, “Your father saved a little money each day for the past three years, just for you.” I nearly cried when I heard this. It was the last and biggest gift that I received from my father because two-and-a-half years after that, he passed away.

My brothers and sisters in God, our human fathers may or may not be able to express the love they have in their heart in the most proper and loving way. It is certainly a blessing to have a father who is wise and loving. But, even if he is not, it is still a blessing to have a father. Let us take a moment of prayer for all fathers, father figures, and father-to-be. May the Lord inspire and enable their hearts to be loving and wise fathers.