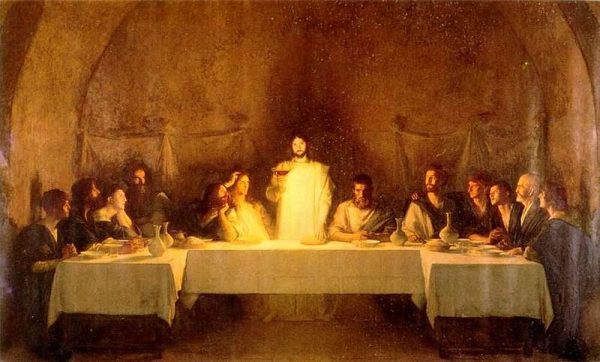 Jesus said to them, “Very truly I tell you, unless you eat the flesh of the Son of Man and drink his blood, you have no life in you. -John 6:53

In the Bible, the first significant mention of bread and wine is in Genesis 14:8, “Then Melchizedek king of Salem brought out bread and wine. He was priest of God Most High.” In Exodus 25:30, God orders, “Put the bread of the Presence on this table to be before me at all times.” In Leviticus, we read that wine was to be offered as a drink to accompany other offerings. Later, in 1 Samuel 16:20, “So Jesse took a donkey loaded with bread, a skin of wine and a young goat and sent them with his son David to Saul.” However, bread and wine became much more significant as they were used by Jesus at his Last Supper with his disciples, which later became the Communion to Christians.

Emmanuel Swedenborg argues that, “Anyone who thinks reverently about the Word cannot imagine how an action so earthly could be pleasing to Jehovah unless something Divine on a deeper, more internal level was contained in it.” What Swedenborg meant by “an action so earthly” is the offering of bread and wine to God. Just as offering bread and wine had deeper meaning, so too did eating bread and drinking wine at the Last Supper and later during Communion. According to Jesus, bread symbolizes his flesh, and wine symbolizes his blood. Thus, he emphasizes, “unless you eat the flesh of the Son of Man and drink his blood, you have no life in you.” It is obvious and clear that what Jesus meant by “life” is not the life of our physical body, but the life of our spirit. At the same time, the crucial aspect of Jesus’ teaching is that the life of our spirit is neither innate nor something that we gain without conscious effort like the growth of our physical body. We could gain spiritual life only by receiving what is of Divine, and by making it our own through the metaphorical acts of eating (implementing acts of goodness) and drinking (implementing acts of truthfulness).

My brothers and sisters in God, therefore, the Communion is not just an old tradition in which all Christians must participate, but a perpetual reminder of God regarding the truth: the spiritual life can only be cultivated and obtained by a life in accordance with the teachings of Christ. That is, loving your neighbor as yourself.