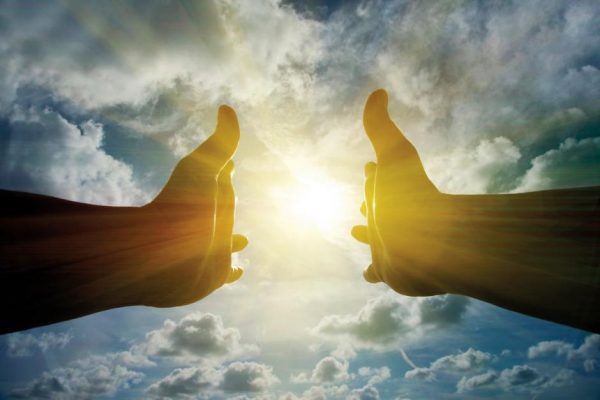 I saw no temple in the city, for its temple is the Lord God the Almighty and the Lamb. And the city has no need of sun or moon to shine on it, for the glory of God is its light, and its lamp is the Lamb. -Revelation 21:22-23

The word “heaven” is used in the Bible to describe both the sky, which is visible to human eyes, and the celestial realm where God dwells. Either way, in the Old Testament heaven is believed to be a place that is beyond the reach of humans. However, Jesus proclaimed as we read in Matthew, “Repent, for the kingdom of heaven has come near.” (3:2) In other translations, this is, “Repent, for the kingdom of heaven is at hand!” (New King James Version) The Greek word eggizo, translated here to “come near,” and “at hand”, means “to bring near, to join one thing to another, to draw or come near to, or to approach.” Eggizo is from the root word eggus, meaning “near of place and position or near of time.” Whichever way we translate the word, the meaning of Jesus’ teaching is clear: heaven is much nearer to humans than what was once believed!

Jesus repeats this new reality of heaven in a few other places in the Gospels, not only as the realm where humans would unite with God, but also as the realm where humans could expect everlasting happiness in God. To a criminal who was being crucified along with him, and who repented, Jesus said, “Truly I tell you, today you will be with me in Paradise.” (Luke 23:43) However, after the institutionalization of Christianity as a dominant religion in the Western world, entering heaven became more challenging to most humans. A simple repentance as we read in Luke 23:43 was often treated as not enough for one to be granted a key to enter the heavenly kingdom. What came after is the much debated claim that the Christian Church controls the distribution of the key to heaven. Thus, those who desire to enter the kingdom of God must obey the Church’s commands, often more so than commandments of Jesus in Gospels.

Emmanuel Swedenborg, who grew up as a son of a Lutheran pastor, might have experienced both the absurdity and irrationality of this claim regarding access to heaven. Swedenborg strongly claims that heaven is not a place to enter with a key given by someone or by some institution, but a state of being whose quality is determined solely by each individual in accordance with one’s own choices in life. In other words, entering heaven has nothing to do with either your religious orientation or how much you do for a physical church on earth. More importantly, Swedenborg highlights the truth that heaven is not a realm you would enter from the outside in, but a state of being that you would discover within yourself.