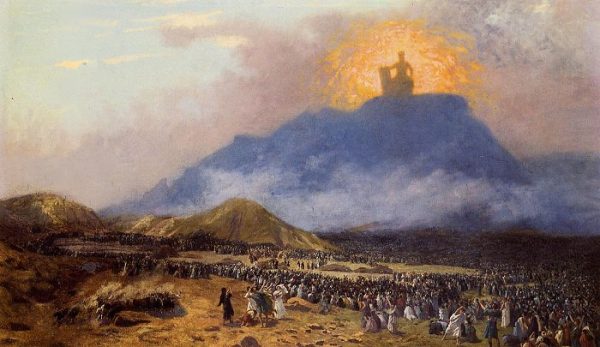 The Lord said to Moses, “Come up to me on the mountain and stay here, and I will give you the tablets of stone with the law and commandments I have written for their instruction.”-Exodus 24:12

In Genesis, first we read that God was walking with humans in the garden. Later, God visited Abraham at his tent and ate the food served by Abraham and Sarah. But in Exodus, Moses was called to come up to God on the mountain. Was there now a limitation on where God could be present, or did humans become incapable of entering into the presence of God?

To the minds of ancient people, mountains – especially the tallest one in the area – were regarded with special attention and significance. Many ancient people worshiped their gods on the highest part of the mountain, believing that their offering would be accepted because they were closer to the realm of gods. According to Swedenborg, this belief originated in the time before Abraham from the ancient acknowledgement and understanding that the higher parts of the earth symbolize the elevated minds of humans. In other words, the mind that contains cultivated or purified goodness. This is important because the essence of the Divine Creator is good itself, and thus only by means of obtaining goodness could humans truly enter into the presence of the Divine. However, there are two kinds of goodness according to Swedenborg: apparent good and purified good. The apparent good is goodness that appears to be good to human minds, but essentially cannot serve as the means to enter into the Divine presence. Purified good is goodness that could be obtained by undergoing spiritual temptations, and thus serve as the means to enter into the Diviner presence. This is why God ordered Moses to “Come up to me on the mountain.”

The essence of human problems, according to Swedenborg, is our innate tendency to be selfish. What this means is that unless we are aware and consciously fight against it, we could be naturally living in a selfish way at any given moment. The truth is that God did not move up to the mountain, which is far away from humans, but humans left God on the mountain and chose to live on the plain, which was more convenient and accessible to them. For this reason, God is often described to be on the mountain in the Bible, and commanded people to come up to the mountain. Thus, cultivating goodness is symbolized by climbing up to the mountain.

My brothers and sisters in God, let us give thanks to Jesus Christ, the Divine Incarnation of our Creator, who not only came down on to where we are, but also ascended up to heaven showing us the pathway. Let us do our best in following the path of Jesus Christ.