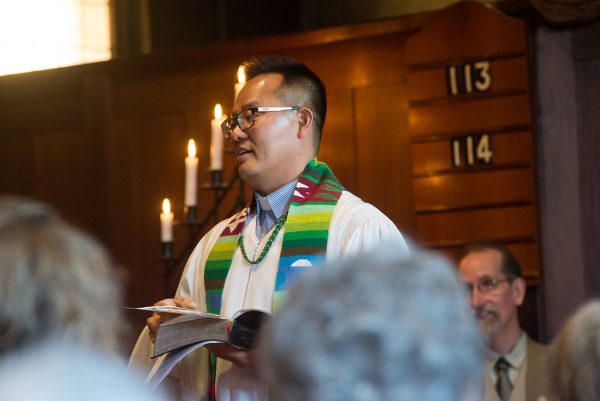 “You shall take the anointing oil and pour it on his head and anoint him.” -Exodus 29:7

One of the most asked questions since I was ordained in 2000 has been, “Why did you become a minister?” People who have asked the question include my best friend in Korea, my wife, and my children. It seems that most of them asked out of pure curiosity, meaning they wish to know the real reason why I chose to become a minister among the many other professions I may have been suited for. To be honest, I asked myself this very question many times since my ordination. In fact, for seven years I wandered through an internal maze to find my own reason for becoming a minister. At times, I felt completely lost or on the wrong path.

Then, in July 2007, after many days of prayer I told God, “My God and my Creator, I am deeply sorry but I am done with it. I am going to quit. But I promise you that I will build three churches for you later.” Afterwards, I went to the annual gathering of the Swedenborgian churches and attended the ministers’ meeting. At the end of the meeting, we had Communion. After taking the bread and wine, I came to my chair and sat. As soon as I leaned back, I closed my eyes and started to pray. In my darkness, a light appeared. Then, the light moved toward me, or I moved toward the light. Soon, I was in the light completely. I heard a voice from the light, “Junchol, do you see it?” First, I wondered what this question meant. Then, as the question repeated twice and then a third time, I found myself answering, “Yes, God. I see it!” At the same time, strangely I thought, “What do I mean by that?” Then, a stream of realization flooded into my mind! When it was over, two things became crystal clear: 1. I chose this path because I heard the calling; 2. God has given me assurance and a purpose for my choice. After July 2007, my answer to the question of why I became a minister has been simple: “Because I heard the calling.”

My brothers and sisters in God, you may or may not have heard the calling from God. In a way, it doesn’t really matter because God’s calling is for all people all of the time: love each other, and be a good example of a loving and caring person.